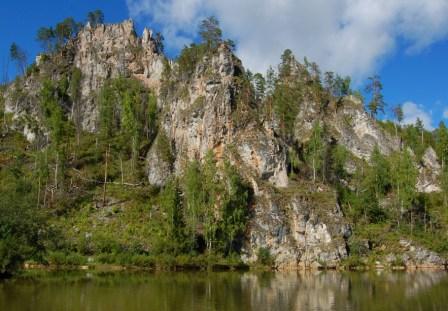 In the ancient times (circa 285 million years ago), the ancient Perm Sea occupied the area currently accommodating the Ural Mountains. Modern rocks and minerals such as limestones, anhydrites, gypsums, salts, oil and coal were formed from the sediments of the sea.

The Ural Mountains being very ancient, an opinion exists that long time ago, the Ural Mountains were one of the highest mountains on the planet. For many million years they have been subjected to natural erosion and currently, they are mere foundations of the olden mountains.

The highest mountains of the Perm Territory are the Tulym Stone (1496 m), Isherim (1331 m), Khu-Soik (1300 m) and the Prayer Stone (1240 m). In the Urals, mountains steeply rising over the area are referred to as the stones. In the past, the Ural Mountains in general were known as the Belt Stone. Currently, the Ural Mountains are a natural border between the Europe and Asia.

Caves are another distinctive feature of the landscape. The nature was generous towards the Perm region and gave it such pearls as the Kungur Ice Cave, Ordino Cave, Divya Cave, Badyino Cave and many others.

Some of caves are equipped for tourists while others retain their primevalness. Each cave is unique in its own right.

For example, the Kungur Ice Cave is widely known not only in the Perm region, but also in Russia for its ice grottoes. The Ordino Cave is a veritable paradise for cave divers
Interactive map Online-Berater Nach oben
ВизитПермь Контакты:
Адрес: ул. Ленина, 39 614000 Пермь,
Телефон:+7 (342) 214 10 80, Электронная почта: info@visitperm.ru