Razbornik consists of round balls of dough with stuffing inside, which are connected as honeycomb.

Stuffing of this culinary masterpiece is usually sweet: preserve, jam, berries (the Soviet option — candies-caramels). Besides, if there is meat, curd or fish inside — the pie consist of little rasstegais (Russian little open pies with a filling). 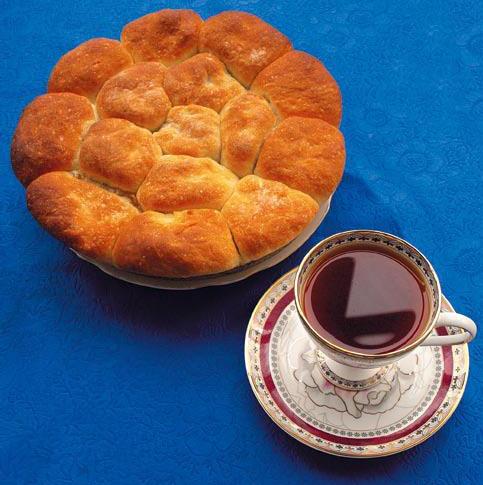 These small rolls are air, soft, nourishing and have a simple form. Structure of a pie is easy as it is a practiced for years national recipe.

Carefully mix 1 packet of yeast with a small quantity of the sifted flour, to form a liquid leaven add a little sugar and warm milk. After 10 minutes, add the remainder of milk (about 0,5 liters), 2 whipped eggs, half-pack of the melted margarine, carefully mixing it after adding each product. Then add the sifted flour before formation of dough with a consistence of dense sour cream. Observing these conditions and carefully mixing, the dough rises 2-3 times within half an hour.

Apple stuffing (or any other) is prepared after the dough has risen. Peel the whole apple without cutting it, rub on a large grater and put a hill on small flat cakes of a dough. Pour out a teaspoon of sugar mixed with cinnamon on a hill and create the closed round pie.

When a stuffing consists of curd, pies are made in the form of cheesecakes.

And now there is a main issue of making a razbornik. Mix the rest of the melted margarine with a small quantity of vegetable oil, dunk pies from both parties and put closely on a deep baking sheet or a frying pan. To bake to a golden, ruddy crust.

After baking the razbornik looks like one big loaf, which is easily divided into separate pieces. The razbornik has a mass of advantages comparing to a usual pie. There are: a speed of preparation and small number of ingredients. And the product doesn't need to be cut: you simply pinch off a circle. The stuffing of correctly prepared razbornik will never be scattered on a table and won't spread on a frying pan.

Delicious "wonderful family" remarkably goes to any party, with big or not really big number of people. Especially the Ural pastries are suitable for fortune-telling. Long since to all guests coming to the house to a Christmastide the whole frying pan of naughty and toasted pies served with different stuffing. And these stuffing not always were edible. Sometimes, the pie stuffing with simple flour came across to the guest. Flour, grain or a copper coin symbolized life in wealth and prosperity. The stuffing from salt or pepper was the worst option — it meant tears and disappointments. If the standard sweet or meat stuffing got to you, year ahead is expected to be good and joyful.

For a cheerful and sincere holiday of New year it is possible to prepare a fragrant razbornik, because this pie is a symbol of a harmonious family and prosperity. Children are crazy about round ruddy rolls, and a razbornik is an ideal option for the hostess "to occupy" all table quickly and tasty.